The White Nile is one of the two major tributaries to the famous Nile River; the other one being the Blue Nile.

The White Nile is a very important river for South Sudan, but it is not exclusive to this country. All in all, the White Nile flows through six different countries: DRC, Rwanda, South Sudan, Sudan, Tanzania, and Uganda.

Sometimes the term White Nile is used to refer only to the river formed at Lake No in South Sudan, where the rivers Bahr al Jabal and Bahr el Ganzal join each other. Normally, the term White Nile is used in broader sense and denotes all stretches of the river draining from Lake Victoria to the confluence with the Blue Nile. When there is a need to separate these stretches from each other, they are called Victoria Nile (via Lake Kyoga to Lake Albert), Albert Nile (from Lake Albert to the South Sudan border), and Mountain Nile / Bahr al Jabal (from the border to Lake No).

The most remote of the Lake Victoria headwaters are situated aboyt 3,700 km from the Blue Nile. 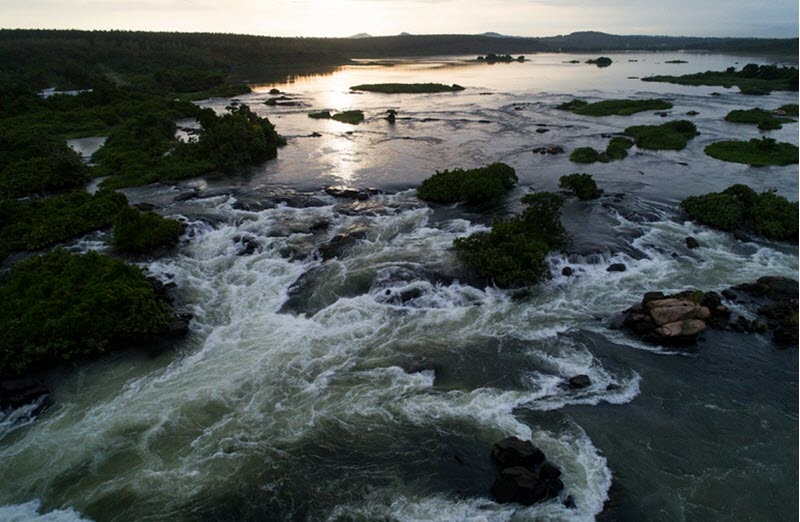 Why is it called the White Nile?

It is called the White Nile because clay sediment often make it look white.

Examples of important cities located along the White Nile

The White Nile in South Sudan

From the point where the White Nile enters South Sudan at the Ugandan border, it is commonly referred to as the Mountain Nile – or Bahr al Jabal in Arabic. This name is used until the river enters Lake No in South Sudan. From Lake No and onward, it is only known as the White Nile until it joins the Blue Nile in the Republic of Sudan to form The Nile.

The river enters South Sudan by the town Nimule at the border to Uganda. It flows trough Central Equatoria, which until the mid-2000 was named Bah al-Jabal after the river.

The river then have to go through several rapids before it gets down to the Sudan plain.

Lake No is located where the Bahr al Jabal river joins the Bah el Ghazal river, north of the Sudd swamp. When the river reaches this point, it has traveled approximately 1,155 km from Uganda’s Lake Albert, the previous major lake on the White Nile.

After Lake No, the river is not called Bahr al Jabal any more; it is only known as the White Nile from this point.

The Sudd swamp is a large wetland area, fed by the White Nile and also by Bahr el Zeraf, an anabranch river that left the Bahr al Jabal upstream, before Lake No.

From Lake No, the White Nile flows eastwards to the mouth of the Sobat River, a journey of approximately 120 km. This area only slopes very gently, so the river runs at a slow speed and the area is characterised by swamps and lagoons.

Just north of the White Nile’s confluence with the Sobat River is Malakal, South Sudan’s second-largest city and the home of the country’s only international airport outside the capital.

From Malakal, the White Nile continues to run at a leisurely pace, but this stretch is not swampy.

After leaving South Sudan, the White Nile continous through the Republic of Sudan all the way to the country’s capital Khartoum where it merges with the Blue Nile to form The Nile.