The Sudd is a vast swamp formed by the White Nile’s Bahr-al Jaba section in South Sudan. This is one of the largest wetland areas in the world and the biggest freshwater wetland in the Nile basin.

From the southern inflow of the Bahr al Jabal at Mongalla, the riverbed successively widens and become a floodplain caracterized in the dry season by meandering rivers, channels and lagoons. In the wet season, the increase inflow of water expands the floodplain to include semi-flooded grasslands.

The hydrology of the Sudd is complex, with various meandering channels, lagoons, reed fields and papyrus fields. In the permanent and seasonal floodplains, roughly half of the inflowing water is lost of evapotranspiration (evaporation + plant transpiration). The Sudd plays an important role in capturing sediments from the Bahr al Jabal river.

On 5 June 2006, 57,000 square kilometre of the Sudd was designated as a Ramsar Wetland in accordance with the Ramsar Convention on Wetlands of International Importance especially as Waterfowl Habitat.

Where is the Sudd?

The Sudd stretches from central South Sudan up to the northern border of the country. 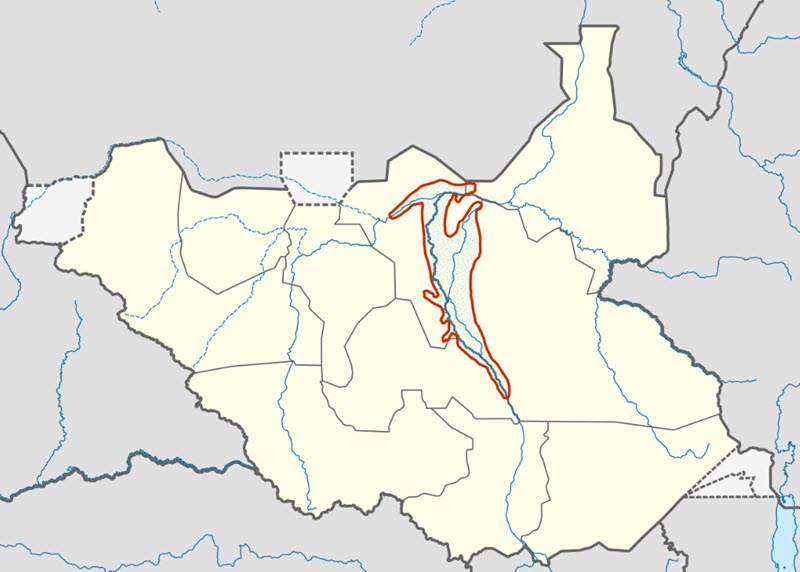 The size of the Sudd is highly variable. During the wet season, it can extend to over 130,000 square kilometres, causing 13% of South Sudan to be covered by the Sudd.

The main factor impacting the size of the Sudd is how much water Lake Victoria discharges. The Sudd itself recieves around 55-65 cm of rainfall per year on average, which is actually less than for neighbouring areas at the same latitude. This is partly due to orographic lifting to the east and west of the Sudd. It should also be noted that as far as we know, groundwater does not have a significant influence on the area’s hydrology.

The civil wars have largely hampered domestic and international conservation efforts. Also, the conflict has led to rifles and other similar weapons becoming widespread in the region, which in turn has encouraged wildlife poaching using modern weapons.

There are three game reserves in the Sudd:

The Sudd is utilized by Dinka, Nuer and Shilluk pastoralists. These rural populations are heavily dependend on being able to let their livestock feed on the seasonally flooded grasslands. They also practise rain-fed agriculture.

The Sudd – a natural barrier 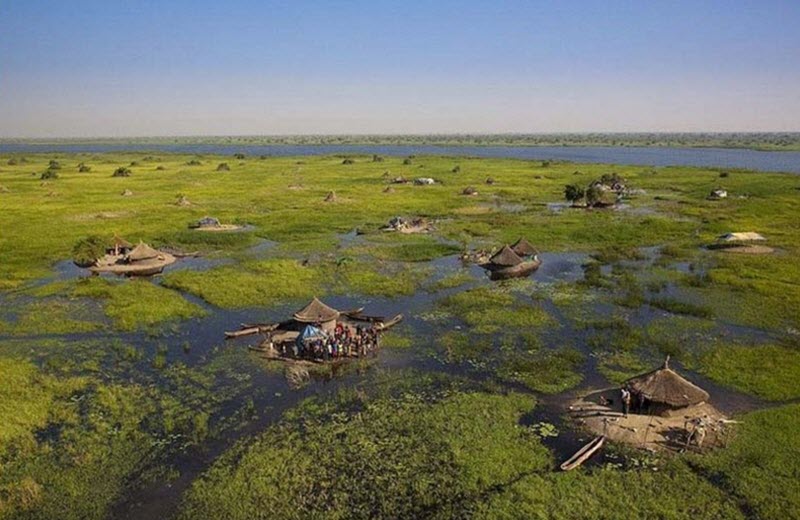 Historically, the Sudd has served as an almost impenetrable barrier to navigation on the Nile, since the thick vegetation makes it more or less impossible for boats to push through the swamp. There are for instance reports from 61 AD, telling us how Roman soldiers sent out by Emperor Nero traveled along the White Nile but had to give up at the Sudd since they could get no further. Thus, the Sudd became the limit for the Roman Empire’s penetration of equatorial Africa.

Much later, European explorers trying to locate the source of the River Nile encountered the same problem as the Romans – the Sudd put a stopp to their boats and they were forced to either return or engage in much more dangerous and difficult overland travel.

During years of increased flooding, large amounts of papyrus can be torn up with their roots and drift, eventually causing manjor blockages in the Sudd.

The Sudd is also renoved for its unpredictable an non-permanent floating “islands” formed by matted vegetation in various stages of decomposition. Some of the largest ones ever meassured extended for 30 km in lenght.

People trying to move through the Sudd also need to handle large populations of mosquitoes and parasites, of which many aren’t just a problem in themselves but also vectors of diseases.

The plant life throughout the Sudd varies depending on factors such as elevation above the river flood level, and is broadly divided into five categories:

The characteristics of the grasslands changes dramatically depending on the availability of water. The rainy season brings tall grass, while short and dry grass dominates the land during the dry season. During the dry season, grass fires are common.

Examples of common plant species in the Sudd 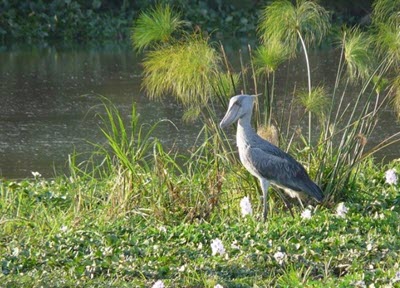 The Sudd is a highly biodiverse area, and a lot of migratory animals rely on it to find water since the surrounding areas tend to be very dry.

The Sudd is especially famous for its large populations of migratory birds. Over 400 bird species have been spotted here. You can for instance encounter black crowned cranes, great white pelicans and shoebill birds here.

Hippopotamus enjoy the shallower parts of the swamp, and so does the crocodiles.

Historically, the African painted dog (Lycaon pictus) lived in upland areas of the Sudd, but these dogs are now extinct in this region.

Soils of the Sudd

The Sudd area typically have heavy clay soils which are highly impermeable and features a top layers of so called “black cotton” vertisol. On average, this top layer extends for 50 cm.

Sandy soils do exist here, but only at depts of 30 metres or more. (They have been discovered when wells have been drilled.)

The Jonglei Canal is a canal project that was started but never completed. The aim was to create a canal to make more water reach the areas downstream in Sudan and Egypt, where it would be used for agriculture. Without the canal, roughly half of the water that enters the Sudd doesn’t reach the downstream areas since it evaporates or is transpirated through plants.

The Second Sudanese Civil War ended in 2005 but the canal project has not been resumed. In 2008, Sudan and Egypt agreed to restart the project, but the independence of South Sudan in 2011 ended the Sudanese Government’s involvment in the project. There is currently no agreement on resuming excavations, which is unsurprising since the boost in agriculture downstream would benefit Egypt and not South Sudan. Concerns have also been raised about damange to fisheries, drying of grazing lands, drop of groundwater levels, and reduction of rainfall in the region. There would also be an increased risk of flooding downstream during unusually heavy rainy seasons.

The draining of the Aral Sea and the drying of Lake Chad serve as warning examples. .

The first detailed proposal for the canal was created in 1907 by Sir William Garstin, Undersecretary of State of Public Works. According to his calculations, a canal would increase the area of cultivatable land in Egypt by two million acres.

In the 1930s, hydrogeologists suggested that a canal should be constructed east of the Sudd to divert water from the Bahr al Jabal (before it reaches the Sudd) and empty this water in to the White Nile further down.

Plans for the project were developed during the second half of the 1950s, but actual construction work did not commence until 1978.