South Sudan is a land-locked nation with land borders to six other nations. It borders Sudan in the north, Ethiopia in the east, Kenya, Uganda and Congo to the south, and the Central African Republic to the west.

South Sudan chiefly consists of tropical forests, swamps and grasslands. The White Nile passes through the country, and roughly half of its water goes into the country’s swamps or is consumed by animals.

The following terrestrial ecoregions, as defined by the Worldwide Fund for Nature (WWF), are present in South Sudan:

The Imatong Mountain Range is located in the south-eastern part of South Sudan and continues into Uganda. This mountain range features dense montane forests and is home to a diverse flora and fauna, although forest clearance and subsistance farming has led to extensive erosion of the steep slopes during recent years. 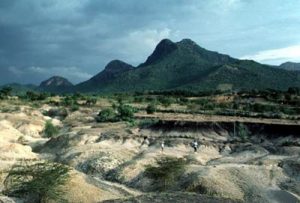 Mount Kinyeti, the highest mountain in all of South Sudan, is a part of the Imatong Mountain Range. The top of this mountain is 3,187 metres above sea level. The prominence is 2,120 metres.

Mount Kinyeti is found within Ikwoto County in the Imatong State, close to the border to Uganda.

The lower reaches of Mount Kinyeti forms the northernmost part of the East African montane forest ecoregion. If you continue further up to higher elevations, you will encounter montane grassland, scattered scrubs and hardy herbs that grow in rock crevices.

Mount Iro is a 1,091 metre tall mountain. Just like Mount Kinyeti, this mountain is located in the Imatong State of South Sudan.

Mount Abourasséin is a 1,113 metre tall mountain located on the border between South Sudan and the Central African Republic (CAR). This means that it is included in both the Western Bahr el Ghazal state of South Sudan and the Haute-Kotto prefecture of CAR.

Lake No and Lake Ambadi are two important lakes in South Sudan.

Lake No (coordinates: 9°29′52″N 30°27′54″E) is located just north of the Sudd swamp, at the confluence of the rivers Bahr al Jabal and Bahr el Ghaza. Lake No’s primary outflow is the White Nile. When Lake No is at its largest, it has a surface area of roughly 100 sqaure kilometres.

Lake Ambadi (coordinates: 8°42′N 29°19′E) is a par of a very large wetland area and is famous for its thriving colony of Shoebills (Balaeniceps rex).