There are two international airports in South Sudan; one in the capital Juba and one in Malakal in the northern part of the country. Of these two, Juba International Airport is the largest and most busy one. 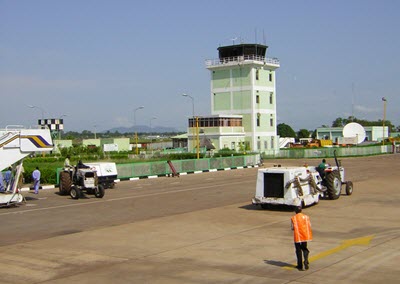 Juba International Airpor is located 5 km northeast of Juba’s central business district, on the western bank of the White Nile.

Juba International Airport handles both international and local flights, including passenger traffic and cargo air traffic. Scheduled as well as chartered flights use this airport, and it is also an important airport for the South Sudanese military.

When governmental and non-governmental organisations carry out humanitarian projects for South Sudan, Juba International Aiport is often the point of entry and exit. This airport has for instance been used extensively by the United Nations.

In 2017, Juba International Airport was ranked the worst airport in the world in a survey conducted by The Guide to Sleeping in Airports.

Examples of airlines and destinations

On 4 November 2015, an An12BK EY-406 crasched on take-off from Juba International Airport. The plane went low over buildings at the end of the runway, impacted a hill about 1,100 metres past the runway end and came to a rest in on the bank of the White Nile. Three people survived the crash, but one of them died soon thereafter. The only two long-term survivors were a man and a baby girl. The official death toll stands at 37, including the crew of six. 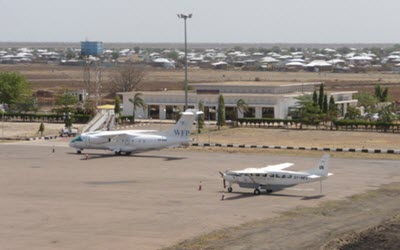 The other international airport in South Sudan is located in Malakal, a city in the northeast of the country, not far from the border to Ethiopia and Republic of Sudan. Malakal is the second most populous city in South Sudan, only Juba is bigger.

Malakal International Airport is situated just north of the city’s central business district, adjacent to the main campus of the Upper Nile University.

This airport was a major staging point for the United Nation’s operations to South Sudan in the past, and is still actively used by UN staff and cargo.

Examples of airlines and destinations

At the time of writing, only Sudan Airways offers schedules service at Malakal International Airport. The destinations are Juba in South Sudan and Khartoum in the Republic of Sudan. ]

About the city Malakal

Malakal, the second-largest city in the country, is found in northeastern South Sudan, near the border to Ethiopia and Republic of Sudan.

Malakal is located on the banks of the White Nile, just north of the White Nile’s confluence with the Sobat River, and it is possible to arrange boat transport from Malakal. From Malakal, boats travel as far south as Adok in Jonglei State, South Sudan. If you go north instead, you can cross the border into the Republic of Sudan and continue on the White Nile all the way up to Khartoum.

The distance between Malakal and Juba is roughly 650 km by road.